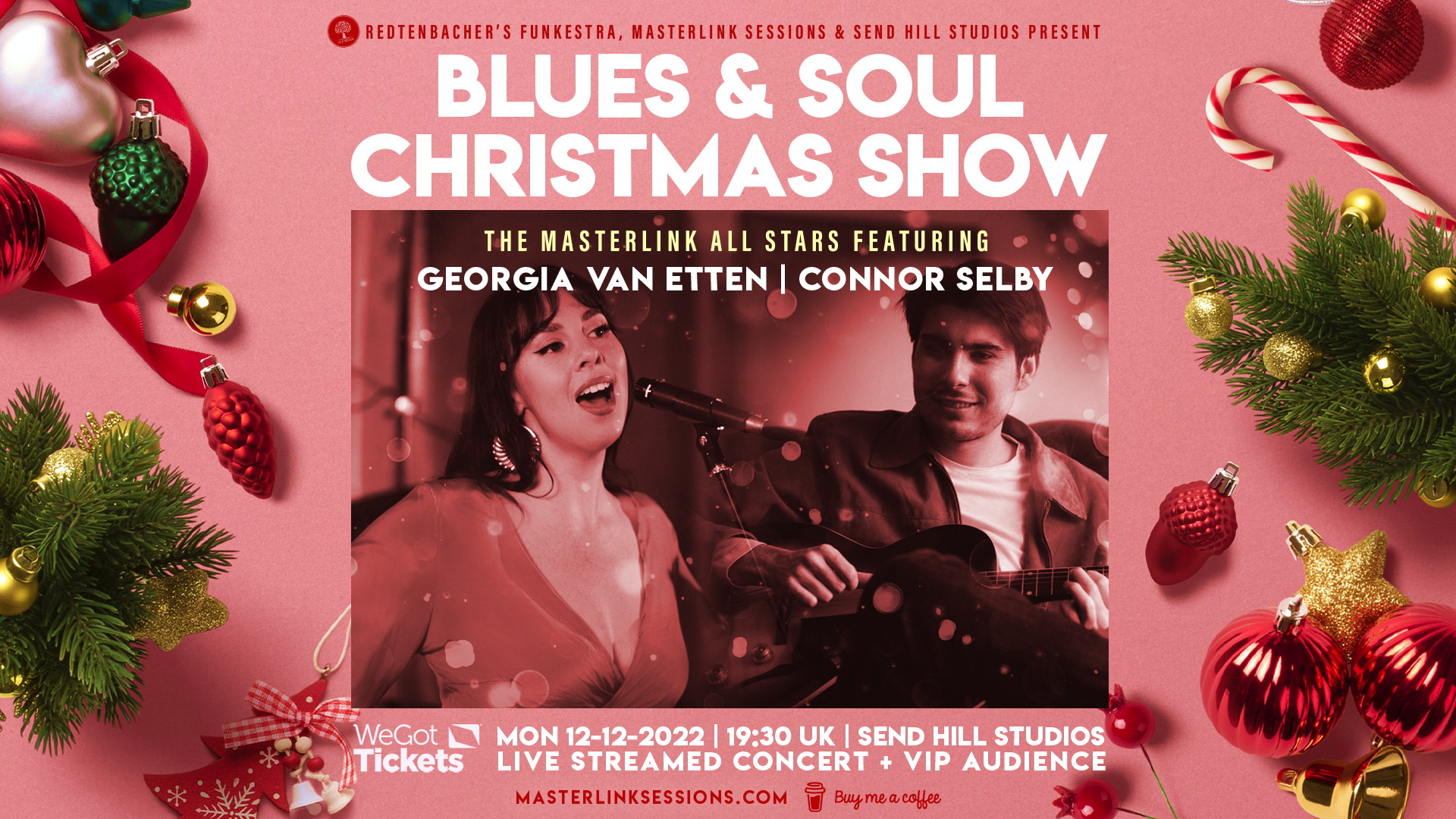 SEC
Paid show
€ 10,00
Buy a ticket
Support the artist
What happens to my donation?

Encouraged by our successful ‘Both Sides Now’ show - a live stream concert in front of a limited VIP audience - we will be back at Send Hill Studios.

Last year the Masterlink All Stars (a.k.a. Redtenbacher’s Funkestra) featured Young Blues Artist of the Year 2022 Connor Selby (since signed to the Provogue/Mascot Label and ITB International booking agency). This year he will be joined by the outstanding Australian soul vocalist Georgia Van Etten (signed to Canadian record label Birthday Cake).

You’ll be hearing a few funkified carols, soul & blues Chrimbo classics and - of course, Georgia and Connor duetting on some of our most favourite Christmas tunes.

For a limited time after the concert only our VIP audience will have exclusive access to the unedited live streamed show. The whole unedited show will not be made available to the general public. 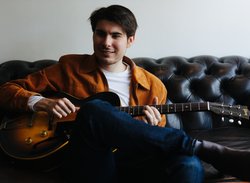 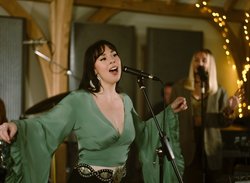 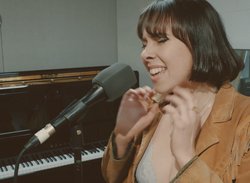 Paid show
€ 10,00
Buy a ticket
Support the artist
What happens to my donation? 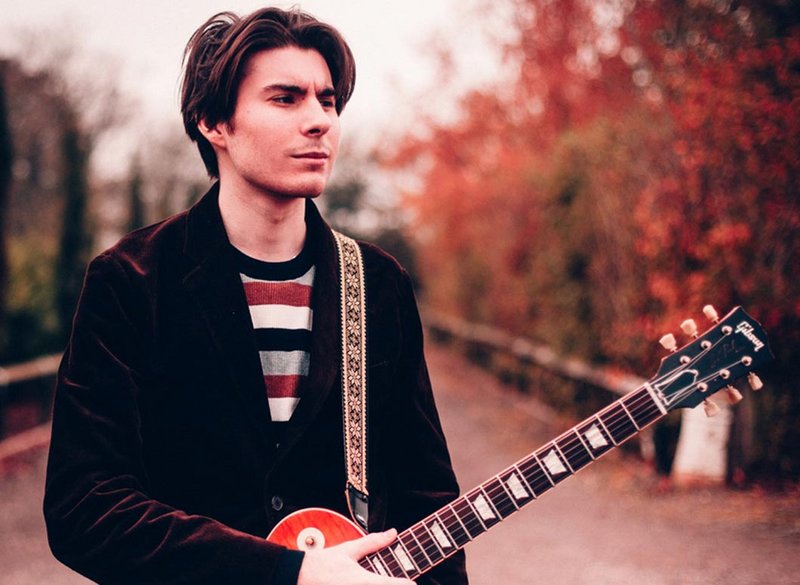 Connor Selby is a rising British star in the traditions of Eric Clapton and Peter Green, who has already performed with his band at Wembley Stadium, at the age of 22, at the behest of The Who. In 2022, Connor signed to Provogue Records, the Blues leg of the Mascot Label Group. His inclusion to a roster of some of the most prominent Blues artists of the 21st century including Joe Bonamassa, Eric Gales, Kenny Wayne Shepherd amongst others, solidifies his position as one of the brightest young talents in Blues.

"John Mayall, Mike Vernon, Eric Clapton, Jimmy Page and Peter Green are amongst a small army of august names who helped shape and define the movement born shortly after the mid point of the last century. Since then a few contenders have come and gone, but, overall, there are conspicuously too few artists carrying that torch in today's industry, some 50 plus years later.  24 year old Connor Selby is far too modest to take on this mantle and welcome those comparisons, perhaps, but the reality remains that his self titled album released on the 10th September will surely secure his position as the emerging light of British blues. Voted the “Young Artist of the Year” for 3 consecutive years (2020,2021,2022) in the UK Blues Awards, the young bandleader-guitarist-vocalist draws on influences as diverse as Eric Clapton, B.B. King, Ray Charles, Free and Van Morrison, creating a soulful blend of hard-hitting blues and emotional, introspective song writing, which, at times, evokes a modern take on the best of the music that inspires him.

In 2022, Connor signed to Provogue Records, the Blues leg of the Mascot Label Group. His inclusion to a roster of some of the most prominent Blues artists of the 21st century including Joe Bonamassa, Eric Gales, Kenny Wayne Shepherd amongst others, solidifies his position as one of the brightest young talents in Blues. 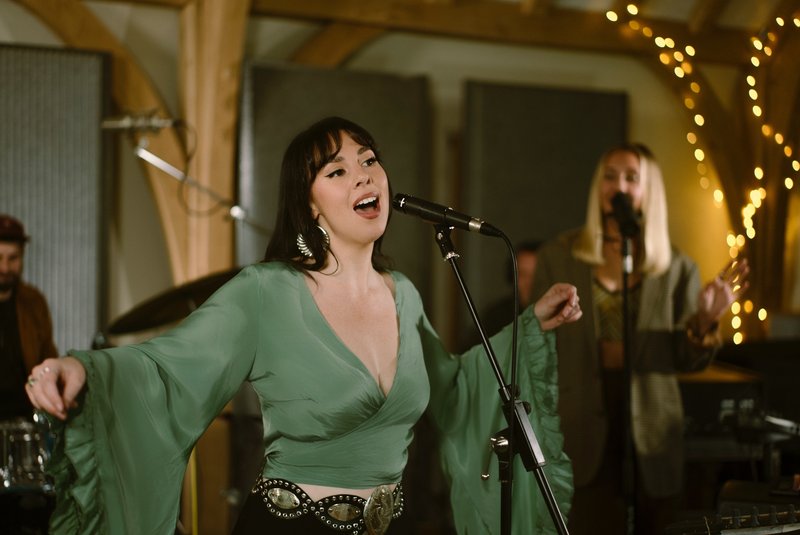 “Enthralling audiences around the world with her refreshing creativity and rich vocal tones”. THE TELEGRAPH, UK

Although van Etten originates from Geelong, Australia, her first experiences with music oddly mimic that of a retro American movie, with her Father blasting folk and country music down long, barren highways and her Mother playing seventies Laurel Canyon tunes on the guitar to a tiny, captivated Georgia. It’s any wonder she developed an intense love (obsession) for singing at a young age, beginning her training in classical voice and moving on to front big-deal soul lineups by age fourteen. Her adolescent years saw her singing with heavy bands like King Gizzard & The Lizard Wizard, and writing with soon-to-be major artists including Alice Ivy.

Georgia’s childhood was abundant in creative experience, but she longed to pursue her own artist career and become emerged in a larger scene. Resultantly, eight years ago, van Etten packed one tiny suitcase and headed for the U.K. Since then she has built worthy respect among fellow musicians and wowed audiences globally playing the likes of Porretta Soul Festival (Italy), Falls Festival (Australia), Raadpop Festival (Netherlands), Montreux Jazz Festival (Switzerland), Ealing Blues Festival (UK) and headlining London Omeara.

Her debut EP ‘Live at the Pool Studio’ had extensive BBC Radio 2 play with Jamie Cullum remarking “This really blew me away when I first heard it” and Blues & Soul Magazine UK declaring “Put simply, this is a damn fine EP”. The EP also sparked attention surrounding van Etten’s unique mouth trumpet impression, with a clip going viral on media giant UNILAD SOUND.

Recently signed to Canadian record label Birthday Cake, founded by The Bros. Landreth, Georgia continues to solidify her position on the international stage. Her debut album 'Deep Black Water' gained a feature in NME, music video on MTV, heavy rotation on SiriusXM North Americana (US), BBC Radio 2 play and a feature session on BBC Radio 4's Loose Ends. The album has been heavily praised in the folk and blues community and the release of a live EP, featuring tracks from the album is set to strengthen the record’s success in the coming months. 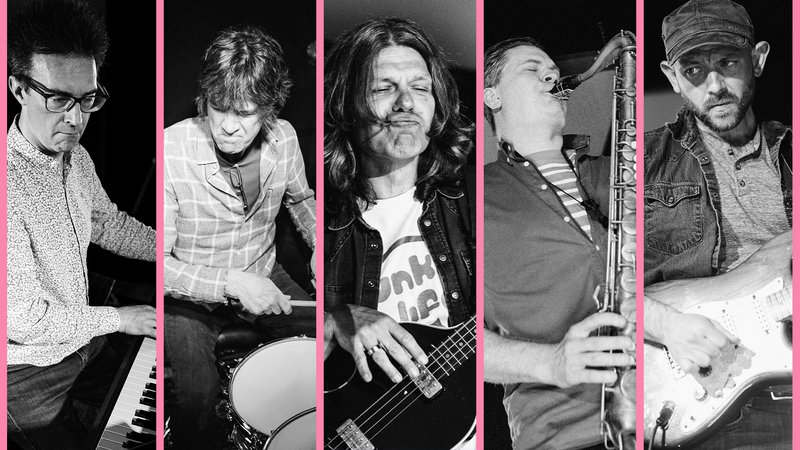 The UK based, multi-national, Redtenbacher’s Funkestra is the brainchild of bassist, composer and producer Stefan Redtenbacher. This original and mostly instrumental wall-to-wall jazz funk collective of world class players has about 20 releases to their name and 5.5 million Spotify streams worldwide.

Their records have been released on Wooden Hat Records (USA), Pedigree Cuts/Universal (UK) and Stefan’s own label RSB Records. Their music has also been publicly performed by Big Bands in USA, Austria, Germany, Holland, Denmark and the UK.